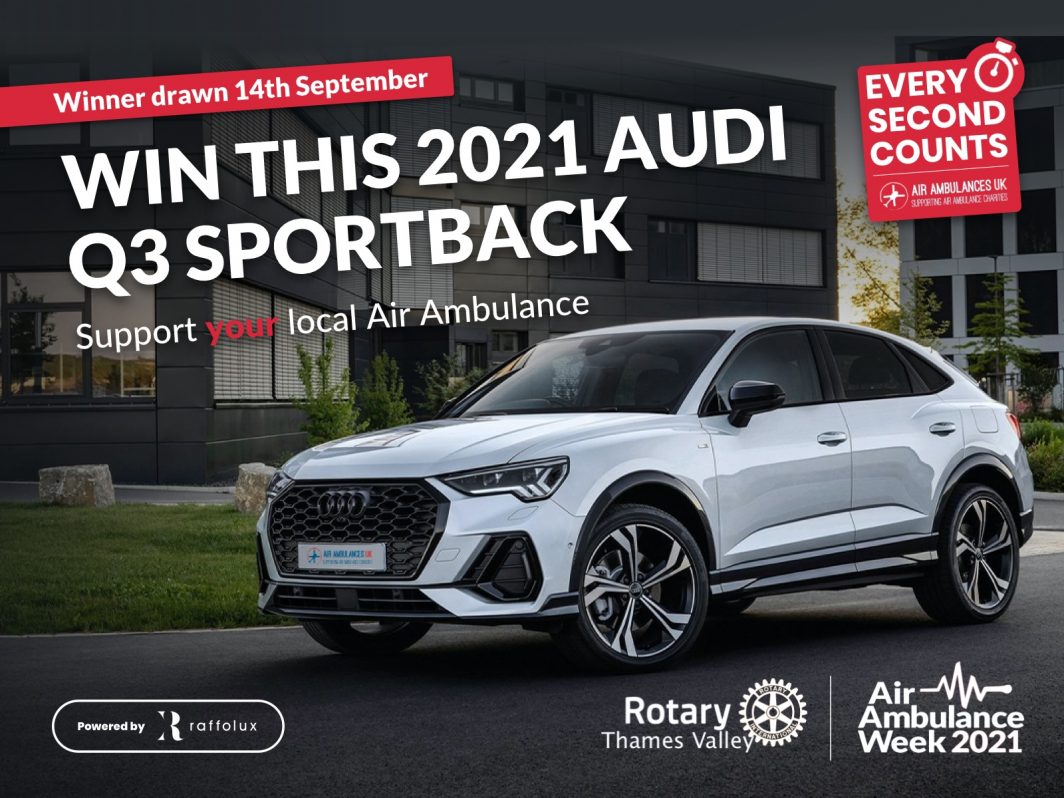 Air Ambulance Week shines a light on the contribution made by air ambulance charities to delivering life saving operations. In the UK around 500 weekly lifesaving missions are undertaken by air ambulance charities to people with life-threatening injury or medical emergency requirements. Each call-out costs the charity between £2,500-£3,500 and is almost entirely funded by donations.

• Enter our Every Second Counts prize draw to be in with a chance of winning a stylish Audi Q3 Sportback hybrid car
• Undertake a fundraising event or challenge and donate the funds you raise with your family, friends and colleagues on our Air Ambulance Week JustGiving page
• Get in touch directly with our team to make a secure donation via a BACS payment info@airambulancesuk.org
• Send a cheque donation to Air Ambulance UK, PO Box 5054, Marlow SL7 9ER
• Get directly in touch with your local air ambulance charity to take part in their Air Ambulance Week activities

Have the chance to win a 2021 Audi Q3 Sportback

As part of the exciting build-up to Air Ambulance Week, we are excited to promote Air Ambulance UK’s new Every Second Counts prize draw with the chance to win a stylish Audi Q3 Sportback hybrid car, while supporting the lifesaving work of air ambulance charities helping them to save even more lives every day across the UK.

Air Ambulance UK have partnered with Rotary in Great and Ireland and Raffolux, the online raffle company, to launch the exciting prize draw which is open from Monday 9th August to Sunday 12th September 2021. The winner will be drawn on Tuesday 14th September.

The funds raised will help air ambulance charities right across the UK to make even more lifesaving missions to people with a sudden life-threatening injury or medical emergency like Madi who was just two-and-a-half years old when she was critically injured after being kicked in the face by a passing horse last year on a walk with her family in Surrey.

“I don’t remember at what point the air ambulance landed, but I remember feeling a huge sense of relief that Madi was in the best hands. The crew spent about 20 minutes on scene assessing Madi’s injuries and deciding what immediate care she needed. Then they moved Madi and her daddy to the helicopter and flew them to St George’s, arriving 12 minutes later.

KSS provide lifesaving specialist critical care at the roadside and have saved thousands of lives like Madi’s. They were there for me and my family at a time when we so urgently needed help, and for that we’ll be forever thankful.”